It's the end of the Renn Fest as we know it....
(but, actually, i don't feel fine)
I feel tired.
It was a good season. Mostly. But i'm worn out. Usually i get a few weeks off once MDRenn Fest is over, but this year, we're going down to Florida (almost 1,000 miles each way) for two weeks to check out the Sarasota Medieval Faire. No rest for the wicked, i tell you what!

The Sarasota Faire should be fun, but i seriously messed up on my timing: i thought i had TWO weeks between the end of MDRF and the start of Sarasota. And, technically, i guess i did. But i didn't include details like, oh, the time it takes to clean and close the booth at Maryland. And the time it takes to drive down to sunny Florida. You know, stuff like that. So, i've been busier than the proverbial one legged man in an arse kicking contest. But i'm still hopping around, doing my best to kick some butt, and make some pots in the process. I'm gonna manage to have some stuff for Florida. I *hope*. Gods willing and the creek don't rise. Further, i mean.

Here are a few pics from the past season at MDRF:
Pumpkins. I made alot of clay pumpkins. Here's a pic of some of them drying in the studio: 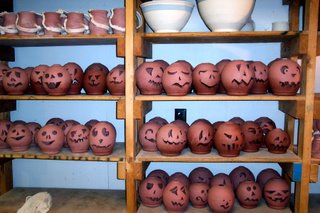 And here's what they looked like in front of our booth at Faire: 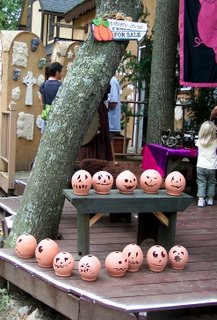 Since i'm writing this on Halloween, i'm done with the whole pumpking thing for this year. Phew! I made at least 200 of the suckers this year. That's alot of pumpkins. I had 40 to 50 a weekend at the Faire from mid September till closing weekend, and i sold out almost every weekend, often on Saturday even... Now that Halloween's done, you'd think i could catch a break, right?! Nope. Now, i'm making pirate mugs for Florida. Gotta have something to put on the shelves down there, so we can justify our week of lounging on the beach in between weekends of selling. Speaking of which, i need to go check the kiln. And then, hopefully, to bed for my very tired self. Will try to post more soon.

Email ThisBlogThis!Share to TwitterShare to FacebookShare to Pinterest
Well, it's been a month, but we're still really missing our Ani. In fact, our pain is "fresh" in some ways, because D & I got tattoos last week, in honor of Ani. Our friend Jill (an amazing, aspiring tattoo artist) designed the butterflies for us-- we told her we wanted black and white butterflies with attitude.
Black and white, cause those where Ani's colors. Butterflies because a) Ani loved to chase them b) they are beautiful but short lived, just like her c) At quote from Philip Pullman's beautiful novel, The Golden Compass that resonates with me so much. It's a witch (who lives much longer than humans do) explaining to a girl about why witches fall in love with men even though they know they'll die very quickly..."men pass in front of our eyes like butterflies, creatures of a brief season. We love them; they are brave, proud, beautiful, clever; and they die almost at once. They die so soon that our hearts are continually racked with pain. "

We put a bit of her ashes in the ink, so she'll always be with us.
This is what they look like...
this is mine: 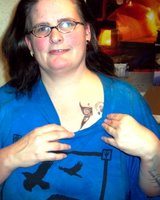 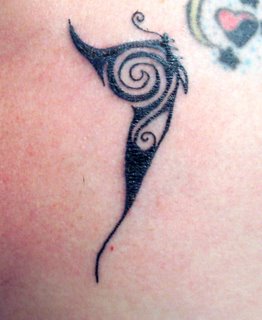 and the hairy back on the right is Darrells: 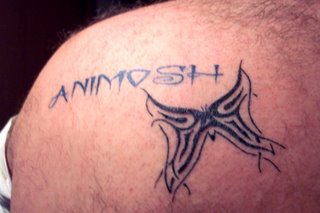