Hello Folks!
We've returned from Pennsic with much less pottery than we took there and a bit more money. This makes me (and my borrowed truck) happy, because money is much easier to transport than pottery. Also: generally more useful when attempting to acquire things like yummy coffee drinks and, oh, you know, dog food.

So, anyway, i thought you might like to peek behind the scenes a bit. This is what the booth at Pennsic looked like when i showed up on the Tuesday of Peace Week. (my trusty minions Rob and Panda set up the tents for me... and left a very artistic trail of empty cider bottles for added decoration) 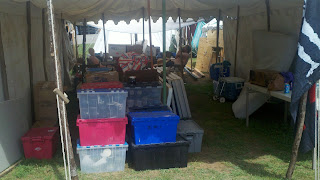 And this is what the booth looked like the afternoon of the next day. The caption could be "who thought bringing this many pots to Pennsic was a *good* idea?" 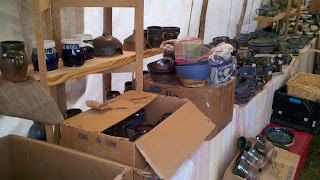 And finally, this is the booth all nice and set up at last. I'm impressed by myself! 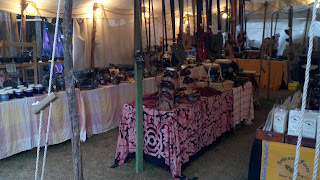 Sorry, i don't have any pictures of the booth at the end of War, but trust me, there were alot of empty spaces where pots had been. This was gratifying. Thanks to everyone who helped to make our takedown much easier than our setup.

So, that happened. And now, a week later, i've done almost all of the Pennsic laundry and am in the midst of my annual freakout over the start of the Maryland Renaissance Festival. Rob and Panda are setting up the booth as i type, so i've got to go make more pots to put in my nice clean non leaking booth.

Next week: pictures of steampunk and henna pots, both of which will be available Opening Weekend of Maryland Renaissance Festival. Which is August 27 & 28. I gotta go make pots.....
Posted by mudcelt at 10:44 AM 0 comments