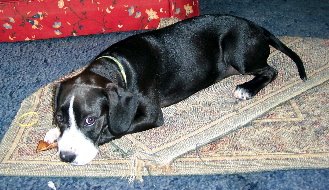 In loving memory
Animosh aka little girl aka Monkey Girl aka Poopie Head
February 1 2006-- September 27 2006
"Such a long long time to be gone and a short time to be there"
The newest member of the Dancing Pig family left us on a sunny late September weekday. She ran out onto the road, on her way home from the bone stash (a spot about 1/4 mile from our house that folks have dumped deer carcases for years-- our dogs head down there, grab some leg or rib bones and bring them back to the house for an afternoon snack... this is life in rural WVa). She was hit by a passing car and died instantly. Her head was crushed, and our hearts feel as though they were crushed as well.

Ani had a brief life with us, but it was a very full one. She went about everything full tilt. She was full of energy, piss and vinegar and she was the boss of our house. It was fun to watch her torment our big dog into playing with her. She weighed 25 lbs. when she was full grown and B. was at least 130 lbs for her whole life. But even if she wasn't large, she was in charge, and she hung off his tail or pulled at his ear till he did what she wanted him to.

Ani was a great snuggler, and slept in bed with Darrell and I everynight- under the covers if it was cold, on top, usually in between my legs, if it was warm. I don't know how i'll manage sleeping without her.

We got Ani at a flea market near Charleston in early March of this year. She was only 4 weeks old. She had been weaned early by her mom cause her whole litter had sharp teeth. She weighed 5 lbs and won our hearts right away.

Ani was allegedly a Cocker Spaniel/ Jack Russell mix. And she did seem to have the fierce independent spirit of a JR terrier but also the heart and eyes of a Cocker Spaniel. She took herself down to the river every day as soon as she was large enough to get down our porch steps. We still have sand in our bed, because she'd come home covered in sand and dirt from her river adventures and hop right onto the bed for a post swim nap.

Ani didn't like to have her belly rubbed. She'd growl and mutter and carry on, but D. "gots the tummy" every day. It was usually what i woke up to: D. rubbing and carrying on, Ani wriggling and growling, trying to get away and enjoying the snuggle all at once.

Ani was a mamma's dog. She always wanted to go with me, wherever i went. She'd get bored in the studio after awhile though, esp. late at night or in the middle of the afternoon. Then she'd crawl up under my wedging table, which is where i stashed abundant stock of empty plastic bags (clay comes in 25 lb blocks inside these bags. I go through 4,000 to 5,000 lbs of clay a year- i have lots of these bags). Ani would crawl into the crinkly pile and rummage around, arranging a nest just so, and then she'd nap till it was time to go into the house. I relished her quiet company & it's just one of the many things i'll miss about her.

She was our heart and our soul, the love in our house flowed through her and we will miss her so much more than words can express.

Fare Well, my brave little one, and know that you were loved and cherished here. We will always love you and look forward to many more belly rubs and river adventures in the Summerlands with your distinctive fiercely beautiful self. 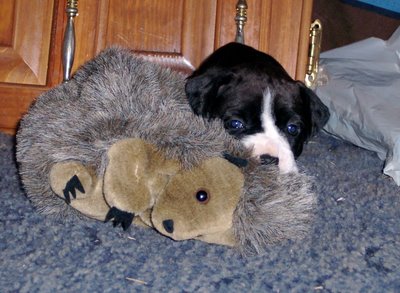 The following is from Philip Pullman's beautiful book THE GOLDEN COMPASS. This is a witch, who lives much longer than regular humans, explaining to a girl why witches take men as lovers, even knowing that they will outlive them:


You are so young, Lyra, too young to understand this, but i shall tell you anyway and you'll understand later: men pass in front of our eyes like butterflies, creatures of a brief season. We love them; they are brave, proud, beautiful, clever; and they die almost at once. They die so soon that our hearts are continually racked with pain. We bear their children, who are witches in they are female, human if they are not; and then in the blink of an eye they are gone, felled, slain, lost. Our sons, too. When a little boy is growing, he thinks he is immortal. His mother knows he isn't. Each time becomes more painful, until finally your heart is broken.
Perhaps that is when Yambe-Akka* comes for you. She is older than the tundra. Perhaps, for her, witches' lives are as brief as men's are to us.

*Yambe-Akka is the witches' death goddess
Posted by mudcelt at 8:05 PM 0 comments